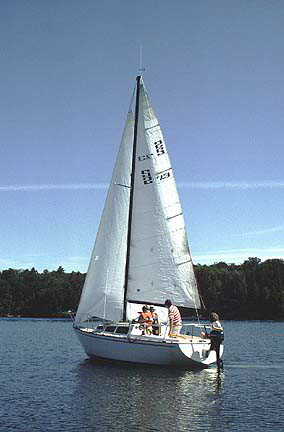 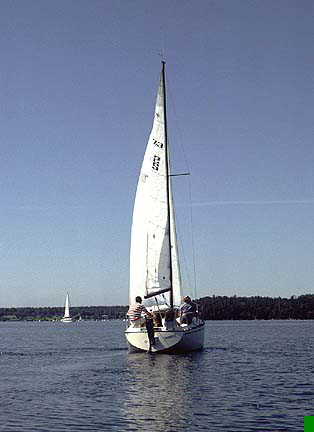 After 18 years of sailing Trinket, she has been sold.
Here's the next new thing.

The photos were taken by (and scanned by when the technology became available a bit more than a decade later!) Bill Schwittek. Bill & Helen were out with Dave & Peggy Bergeron on the Bergeron's power boat Peggy's Pool to witness the start of the 'bipolar* regatta', an impromptu race from Malletts Bay, VT to Valcour Island, NY by a bunch of sailors from work.

After the race, we rafted up, partied a lot, then tried to sleep that night at Sloop Cove on Valcour Island. Somewhat to our surprise, the weather turned really nasty overnight well in advance of the forecast, and we tested our family ties, our resolve, and a bit of the rigging on the way back the next day. In spite of my fears, the family did go sailing with me again after that.

* In 1984, the engineers, chemists, physicists, etc. working in the semiconductor business knew bipolar as a type of transistor, not a brain disorder.